Should I Use Selfies On Dating Apps Like Bumble, Hinge?

Despite the growing trends of selfie sticks, selfies, camera phones and the like, many people don’t have great or decent photos for their dating profile.

Many people struggle with taking photos, don’t have that many friends, or don’t have people around them that take photos. There is nothing wrong with living a minimal digital life except when it comes to online dating.

Dating apps require photos in order for people to create a profile, obtain matches and hopefully go on dates. The best type of photos to use on a dating profile are those that show people in good lighting and show a range of photos that include close-ups, full-body, activity and location-based scenery.

It’s rather hard to get this range of photos using selfies only. Sure an occasional epic selfie with a location, the occasion can work great but most selfies are terrible, lazy. According to Hinge, selfies receive 40% fewer likes than non-selfies and bathroom selfies receive 90% fewer likes.

Below are some tips on how to use selfies effectively, how many to use, what to avoid and how take photos on your own.

For the most part, selfies are rather unflattering. For one, they are taken at close proximity and don’t allow for enough space between the subject and the camera. Why is this an issue? Photos taken at a close distance are generally distorted (appear wider) than they would at a further distance.

This can make faces appear bigger, which is typically not desired. This is worst for those with short arms and take selfies, as the images are even more distorted.

The other reason why selfies are not recommended for dating profiles is that they often fail to contain enough conversation starters or background information to inspire conversations. They are typically too close to containing information about where one is and what they are doing.

The other reason why selfies are unflattering is that most people don’t know where to look. They often appear looking off to the side just slightly rather than directly at the camera. Face selfies that take up most of the screen are useless and lack context and make you look bigger (too close to the camera).

Related read: How To Be More Photogenic In Dating Photos

In theory, the most flattering (slimming) angles for selfies are those that are taken from high angles. These angles provide a slimming effect and force the subject to stretch out. This is also why people use selfie sticks from the same angles.

Unfortunately, most people know this and a few people try to deceive others about their true appearance.

Most people don’t look great in selfies because they don’t know where to look, use bad lighting, use bad angles i.e. below chin, are not happy i.e. taking photos because they think they should vs being happy in the moment, or get tired and stop smiling. Photos take practice.

Photos from high angles give people pause about the authenticity of said dating profile. Does the person appear like they do in their photos? Is the person trying to deceive others about their appearance? Are they trying to hide their bellies or slim their waistline?

These are legitimate questions that run through people’s minds and are enough to cause them to swipe left on profiles. The worst thing one can do for their self-confidence is to show up on a date only to be ditched immediately for lying about their looks.

What Do Selfies Signal? What Do Your Selfie Photos Suggest? Do Pictures Matter On Tinder? Do Selfies Make You Look Insecure?

A selfie in of itself doesn’t suggest much, but several selfies in a dating profile can suggest one of many things including lack of friends, lack of outgoing personality, insecurity with others taking photos of you or unwillingness to show you and your full body.

On the more extreme side, selfies can suggest a strong narcissistic personality, which is also not flattering. Selfies with duck faces or trying too hard to convey vanity.

Related read: What do your dating profile photos signal?

How Many Selfies Should You Have On Dating Profiles? Tinder, Hinge & Bumble?

Ideally one should have zero selfies with a dating profile but if selfies are all you have, then limit selfies to 1 photo, 2 max if you have 4 other photos of yourself.

The number of selfies is only one piece of the puzzle. They have to be good selfies and great conversation starters. Selfies taken against a generic wall, in your hallway or in a mirror don’t add value nor context. Recommended selfies should be rather epic.

The best selfies are the ones that are great conversation starters. Typically, travel destinations, photos with celebs or selfies taken outdoors in beautiful places and backgrounds are the best.

Occasional self-deprecating humor can be pulled off it’s harder to do so with the limited space between the camera and the subject.

Good selfies are more so about the background and location rather than just the person so having space is highly recommended.

Pro-tip: How To Take Your Own Dating Photos

On Hinge, there is a caption titled ‘selfie #503’. This just means you take a ton of selfies. Not flattering.

Bumble is perhaps the only app that has somewhat strict rules and guidelines around what photos can be used.

Although virtually all apps ban nudity and the like, Bumble goes a step further to ban all bikini and shirtless mirror selfies taken indoors from their platform.

Should Women Use Selfies On Dating Apps?

Women can use almost any photos and they will get some attention on dating apps but what kind of attention is another story.

Some guys specifically target women with profiles full of selfies for scamming purposes (thought here is that they are more lonely or less self-confident). 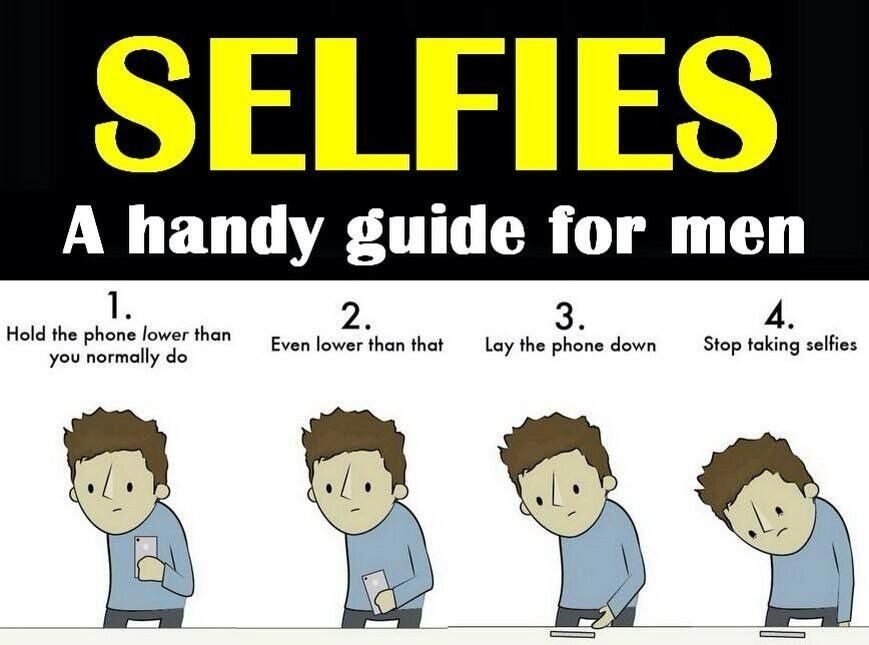 -Car selfies (inside the car)

-Car selfies (next to the car)

-Pet selfie (especially with their tongue in your mouth)

-Attention selfie (the one that has no context other than look at me!)

-Selfies that reveal too much (selfies of your chest)

-Too many selfies (limit to 1 max per profile)

Selfitis: What Psychologists Say About Selfitis, Are Selfies Narcissistic? What Does It Mean When Someone Takes A Lot Of Selfies, What Does Posting Selfies Say About You, Link Between Selfies And Mental Illness

Attention-seeking behavior can be signs of narcissism and psychopathy. Addiction to selfies can lead to mental illness. Browsing one’s Instagram profile is a great way to screen for selfitis.

How Do You Spot A Narcissist On A Dating App? Narcissistic Dating Profiles

There are a few ways to ID narcissists on dating apps. Usually it’s one or more of the following: inflated ego, gaslighting, always seeking your attention and act needy / seek validation, compliments.

Photos can include beach chairs with photos from the neck down, excessive selfies, selfies taken for no reason (no context, no friends, no location in particular), duckfaces, cleavage shots, ab photos, pouty faces, looking away in photos.

These folks might take things a step further and set up or agree to dates only to cancel them and repeat the cycle. Some might actually go on the dates but be lazy or there to make themselves feel good by expecting to be showered by compliments (recent break up, low self-esteem).

Whatever the case, don’t ignore these red flags in a dating profile or in person.

If you must use them, make sure they are epic. Amazing view, fun location, quirky venue etc. Extend your arm, don’t raise your arm to high to avoid obviously making yourself appear slimmer. Use even lighting, smile and try to look at the camera to avoid looking cross-eyed or tipsy.

Aim to take photos with friends when possible. Get as much of as and the background/location as possible. Avoid boring locations with no context. Most importantly, smile!

On the other extreme, professional headshots should not be useacd for dating profiles.

Photos are often blurred out and cropped to closely for any good conversation starters to be visible. Secondly, they are likely to be viewed as being filtered or photoshopped as most photographers use this technique.

Go ahead and look up your friends profile photos on Linkedin in and chances are they don’t look like themselves (unless of course I took their photo).

Is It Cringe To Post Selfies To Dating Profiles? Are Selfies Tacky On Dating Apps? Are Mirror Selfies Cringe?

What Does It Mean When Someone Always Posts A Selfie?

It means they have likely mental health problems of some sort, are experiencing depression, are unhappy with their lives or need constant validation from others since they lack confidence in themselves. The type of selfies is a good indicator of what is going on with said individual.

How To Take Your Own Dating Profile Photos (Tinder, Hinge & Bumble), How To Take Dating App Photos By Yourself, Want More Matches Ditch The Selfie

Read this: How to take dating profile photos on your own.

How To Look More Attractive In Your Dating Photos – Wardrobe, Body Language & More

The Most Cliche, Overly Used And Boring Dating Photos To Use In Your Dating Profile – What To Avoid In Hinge, Bumble Profiles

How To Be Successful With Online Dating – Tips For Messages, Prompts, Bios, Swiping, Photos & More

Best Tinder Profile Photos – What Photos To Use To Get More Likes, Matches