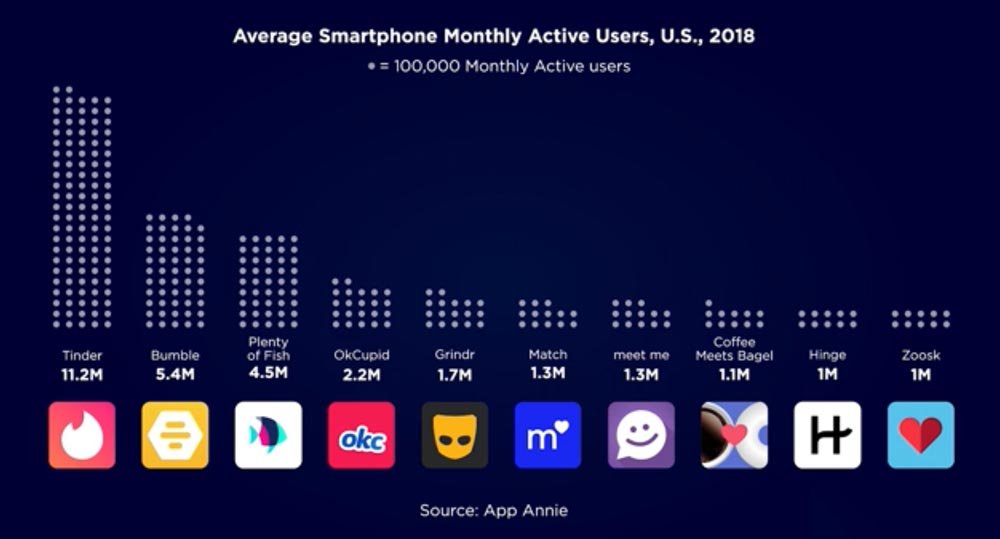 App Annie, an apps data and analytics company that tracks downloads and active users across mobile devices released a report on the average monthly users in the United States across Tinder, Bumble, Plenty of Fish, OkCupid, Grindr, Match, Meet Me, Coffee Meets Bagel, Hinge and Zoosk.

These figures represent accounts, not users. For example, a single person can activate multiple mobile devices. This is much more difficult to do on an app like Bumble that verifies identities but not so much other apps that have more lenient policies around registrations, unfortunately.

Another thing to consider is that the numbers above also include spammers, bots and those not necessarily looking to chat, meet up or date. I would know because I have several test/dummy accounts to monitor apps, do background checks for clients and keep track of offers, new product releases and features.

Please note, the highest user counts do not correlate with user satisfaction or recommended dating apps to use. Dating apps like Coffee Meets Bagel and Hinge are largely more popular in larger cities as opposed to smaller towns with fewer users.

Also, this does not factor desktop users for sites like Match.com, Zoosk, OkCupid, Plenty of Fish which have large user bases that only use the desktop versions of the dating service and do not use the mobile app offerings.

Which Dating App Has The Least Fake Profiles, Have Background Checks?

Just because an app has the most users doesn’t mean it is the best app out there let alone the best app for you. The best apps out there consider your age, location, demographics, what you seek and lifestyle.

Some dating apps do more extensive screening and background checks than others. With that said, don’t rely on dating apps to screen all bad people nor don’t expect everyone is honest on dating apps. Learning how to identify fake profiles as well as red flags will help you with your online dating efforts.

To learn more about the best dating apps out there, read this post: https://eddie-hernandez.com/best-dating-apps/

On that note, success rates on dating apps are largely driven by individual actions, knowledge, emotional EQ, location, age, photos, communication skills, lifestyle and number of deal-breakers. Dating apps these days are merely introductions apps, they are not meant to used as background checks.

You meet online, figure out if you like the person and get to know each other online then ideally offline. Not everyone is as they appear. Lying is fairly common so knowing how to be patient, ask questions, use good judgment and ability to read people and messages is key.

The other thing to consider outside total users is gender ratios on dating sites. Some apps are more balanced while others are skewed in terms of number of male to female profiles on the app.

Average age is not a useful measure because most users are younger and a few older people can skew the age up so most apps prefer to use median age instead.

How To Make A Good Bumble Profile

How To Make A Good Hinge Profile

Is Online Dating Worth It?

Bumble vs Hinge vs Tinder

How To Be More Successful With Online Dating