How To Respond To Hey On Bumble

Hey messages on Bumble as are common as wine, mimosa, yoga, fur-baby Instagram handles on bio (about me) sections of the app. They feel a bit generic, low-effort and boring. Chances are you have gotten more than your fair share of variations of hi/hey on Bumble (probably more so than Hinge). 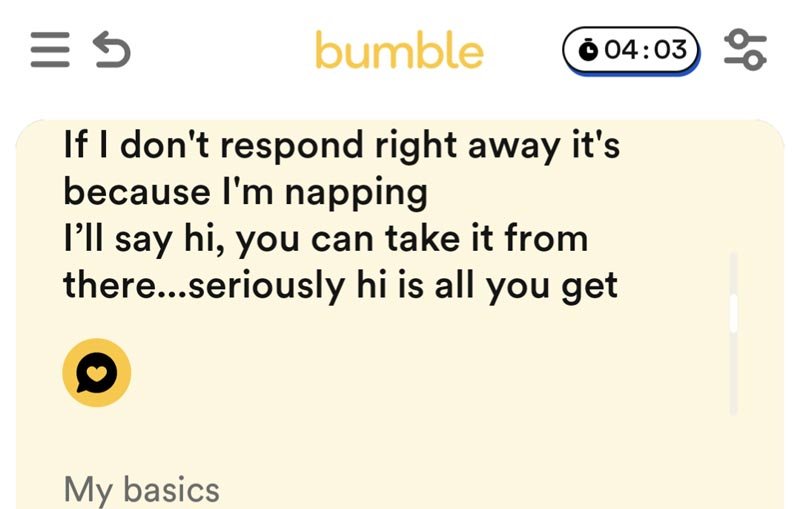 Some guys absolutely hate seeing this message, while others don’t care (they are just happy to get any message, let alone matches on the app). Everyone has their own opinion on the matter, but I am here to give my thoughts on the subject, so you can navigate the app more effectively and efficiently.

Before I give some tips on what to do when you receive such messages, it helps to understand why women say hi and hey on Bumble.

Bumble is one of the most popular apps out there and typically features more attractive folks on the app than others like Hinge (see my Hinge vs Bumble app comparison) but it also has one main difference that people tend to overlook and that is the like function.

On Hinge, users can send a comment with a like. On average, comments sent with likes show more effort and are better indicators of interest than likes alone. Comments can also reveal if you read a person’s profile.

I know what you are going to say – I send likes and comments with likes and see no difference. I get that, it happens, but chances are, if you are swiping outside your league, ignore deal-breakers like age, distance, ethnicity, education, intentions, lifestyle choices, religion and politics, doesn’t matter what comment you include.

Similarly, even if you don’t ignore those items, you are more likely to avoid standing out if you are focusing on people who are super popular and have lots of likes and matches or if you are using generic lines on them.

Again, I know what you are going to say – but I use thoughtful custom lines. In your mind, you might think so, but chances are she has heard these comments before, even if you are trying hard. Being unique not just in your comment but your style, punctuation, timing matters. If you are commenting on the photo, everyone else, it won’t matter what you say.

Given men can’t separate themselves on the app with a comment like with Hinge, all they can do is swipe and some men take the volume approach and swipe right on most/all women. In turn, women are likely to have not gotten a reply to any message they sent and thus are likely to be frustrated and exert less effort thus hi/hey is what you see often.

This set of experiences and expectations is a race to the bottom of the toilet bowl. People becoming jaded, genders mirroring expected effort and people making assumptions across all genders rather than using good judgment, screening profiles, reading people and leaving room for exceptions to the rules.

Now that you know where women are coming from, you can start to understand why they behave the way they do. Some women are just narcissistic, jaded, or time-wasters, but many are shaped by relentless low effort, harassment, and poor behavior by your gender. Blame men, especially when they outnumber women 2:1 or 3:1 or more.

I get it, it’s frustrating and even with the perfect lines, commenting on the right photo or using a great delivery, your messages are still not getting responses. It’s never one thing. It can be your photos or your prompts. Low effort photos, bios and prompts make it hard to come up with a good opening line.

If you are a homebody, use vague prompts and bios, it’s hard for women to think of something clever, witty or funny. The more boring, basic you are, the harder it is for them to come up with an opening line.

The other thing to consider is the interest to like and match is less than that of messaging. Just because you she liked you initially to swipe right on you, doesn’t mean she has more interest to message you. Once matches are accumulated, women (and men too) re-rank profiles based on attraction, effort, timing and just luck.

In other situations, the clock can be running out and trying to come up with an opening line as the clock ticks away can be nerve-racking. I am not saying you have to give benefit of the doubt to every women, but it helps to screen profiles, read people and use good judgment.

Bumble Conversation Starters, Bumble Opening Lines, How To Start A Conversation With A Guy On Bumble, Good First Message On Bumble

If you avoid just saying hi/hey, you are ahead of the curb. Just look for clues in the profile. Not much there? Move on, simple. Don’t waste your time on low-effort guys with boring profiles, generic prompts and lame bios.

A comment or opinion followed up with a question is great. Don’t overthink this. Don’t comment on looks, focus on expressions, activities, clarification, observations, connections and perhaps some light-hearted commentary.

That’s it! If your lines aren’t working, chances are he is not into you or swiped on your profile without much thought. Some guys do this. It sucks but best to move on and not overly invest yourself in strangers or put your self-worth into apps or lack of responses.

Unfortunately, there is no perfect way to respond to hi or hey on Bumble. Typically, if you have a lot of matches (and matches you are excited about), I would ignore low-effort messages like this. I would prioritize those that are more thoughtful and show more effort initially.

I am sure the next thing you are thinking is what if I don’t have enough matches to begin with? What should I do then? Good question. You can either stop using the app and use another app that is less competitive. You can take a break and get feedback on your photos, photo order, bio and prompts.

You can also, assess your lifestyle choices, hobbies, grooming, hygiene, wardrobe, facial expressions and more. These things take time, and most people are too nervous to get unbiased feedback on themselves. Until you do this, it doesn’t make sense swiping more and getting overly anxious and sad about matches that don’t message you.

Sure you can do better by learning how to identify narcissists, low-quality profiles and those that are not ready to date or not likely to match with you, but that can be tough. Yes, IG handles in Bumble bios can be a red flag for many guys, but not for all.

In some cases, beggars can’t be choosers. But if you find yourself struggling after a few messages, it could be your messages, or it could be them. Until you get feedback on your conversations, profile, swiping patterns, and profiles of your matches, it’s hard to figure out where exactly you can improve.

There are other clues in a profile, outfits, poses, locations, prompts, bios and facial expressions I help clients with in identifying in profiles, so they can be smarter and more efficient when it comes to swiping on apps.

Knowing what to look for and understanding what you are overlooking in profiles can make the difference between you wasting your time on narcissists, players, influencers, spammers, bots and fake accounts.

How To Write A Dating Profile: Tips to make a profile to encourage messages on dating apps.

Dating Profile Photos Guide: Advice on which photos to use to provide conversation starters.

How To Be More Successful On Dating Apps: Step by Step, Exhaustive Checklist.