Hinge Invited You To Start The Chat, Your Turn

What Is Hinge’s Invited You To Start The Chat? How Does It Work? Hinge’s Invitation To Start A Conversation Feature. Mark Unresponded Messages, Reduce Ghosting, Etiquette

If you have used dating apps long enough, you will notice a large portion of likes or comments rarely turn into matches on dating apps like Hinge, Bumble and especially Tinder. Of those limited matches, a few lead to conversations (that’s just the harsh reality of online dating). Even on apps like Hinge there is a lot of confusion around whether to like vs comment along with a like as well as who should message first.

Online Dating Communication & Messaging Etiquette On Hinge: How To Start The Conversation On Hinge

There are a variety of reasons for this inefficiency including: volume of matches, lost interest, further investigation of the profile beyond main photo after matching, better options presented, unflattering Instagram post, got tired of the app or online dating, other person did not initiate conversation, never intended to communicate (bot, spammer, looking for Instagram likes, website traffic, accumulating likes on apps) etc.

Yes, it’s true that photos will have the biggest impact on your online dating efforts, but many people look to bios, prompts, captions and opening lines to evaluate effort, intent, sincerity, creativeness and of course ability to engage in witty banter. Communication skills are key to advance past matching and move on to more involved communication and connections.

Here are some tips to understand first message etiquette on Hinge and get over the initial hump of first messages, no replies and ways to troubleshoot if you have been shadow-banned or if there is a bug in the app and you need to contact customer support on Hinge to take a look at your account.

Why Do Guys Match And Not Message On Hinge?

Some guys like most or all women’s profiles, regardless if they are interested in them or not. Some do it as an ego boost (how many matches can they achieve) while others only message matches they are most interested in i.e. likely to hookup with or most attractive. Using the Invite To Chat feature may not be helpful. 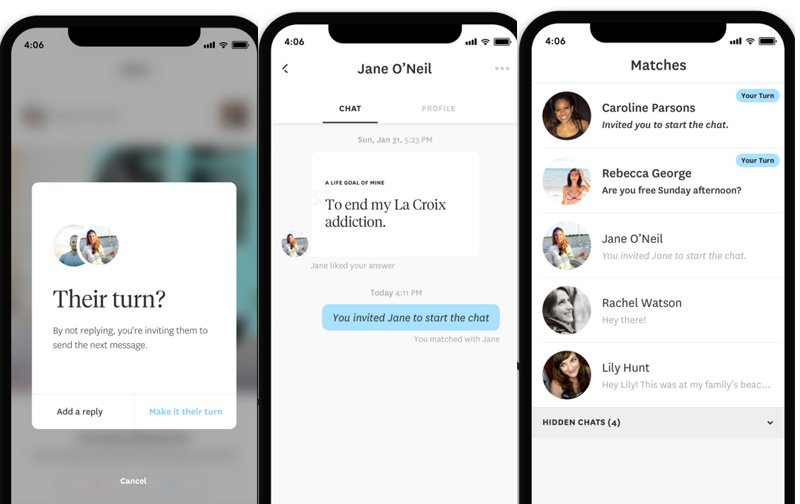 Hinge released a feature called ‘Invite to Chat’ whereby people (either gender, not just women) who have received a like or comment notification can then turn around and invite the individual who liked or commented on a photo or prompt to chat. Anyone is able to also send the first message without this feature.

The aim here is to show an intent to engage in conversation without having to use words and to reduce ghosting by the other party. This feature also contains the ability to mark messages as responded. These are gentle/ungentle reminders to continue the chat with your match.

Hinge describes the feature as letting users decide who should make the first move. Many would argue that a like or comment on a prompt or photo is a first move while others suggest these are incomplete, ambiguous, low effort signals (not much better than a hi, hey, what’s up).

It also claims the reason behind the feature is that 23% of people “just got busy and forgot” about people in their inbox. I would argue that if you have that many matches or not on the app enough (2-3x a week, 20-30 minutes a day is plenty) then perhaps online dating is not for you. With that said, the prompt can disappear if you wait too long, the other person meets someone else or blocks you or gets banned.

Who Messages First On Hinge? Should You Like Or Comment on Hinge? How To Open On Hinge

Unlike the Bumble dating app, anyone can send the first message. If you just send a like, that is viewed as lazy and low effort. Always send a message or comment with a like on Hinge. If you don’t, someone else will. Waiting for guys to send the first message is one of the biggest mistakes women make on dating apps – be a driver in your life, don’t be a passenger. If you wait for guys to message you first, you likely will be bombarded by guys who use the volume approach.

A simple note (always use the person’s name) such as a question that shows you looked at their profile vs asking a generic question like what’s up is recommended. Read more about the importance of commenting vs liking and tips to stand out, what to comment on (photos or prompts). Commenting on a profile prompt or photo can greatly improve your chances for a reply.

How To Respond To Invited You To Start The Chat, Conversation

On occasion, people may not see your original comment. It’s rare but Hinge is one of the buggiest dating apps out there. If you do get this prompt after sending out the initial comment, merely point out that the conversation has been started or that you commented on a photo or prompt. Some people will acknowledge this oversight, some may reply saying there was no mention (Hinge is pretty buggy so not out of the question).

If no response or if you receive a lame response, move one. Rarely do people not notice the initial message and a simple reminder/prompt is enough to rekindle a conversation but don’t hold out too much hope.

Many folks on dating sites are flaky, lazy and inconsiderate. Focus your time on those that respect your time. You should only focus on those that match your time, effort, enthusiasm and respect otherwise consider this lack of decency as a possible red flag.

Whether its men or women, straight, gay or bi, people like it when others show initiative beyond initial interest. It shows confidence and frankly many people on dating apps could benefit from some of this.

Too much anonymity, hiding behind old, blurry, dark photos and incomplete bios has made it challenging for people to reveal themselves. This is all the more reason to stand out more easily among a sea of indecisive, insecure and nervous folks.

What Can You Infer About People Who Use This Generic Prompt?

Inviting someone to chat after a comment is already sent is lazy. People like this are looking to be entertained or use it as a way to analyze someone to see if they can manipulate them and take advantage of them. It can be an early indicator to see how eager and quickly you are willing to jump through hoops for a complete stranger.

Similarly, if you send a like and the other person sends this message, it is slightly better but chances are neither party is that interested nor outgoing enough to put themselves out there. If you like someone, comment on a profile or photo, don’t just send a like. Better yet, follow up on the comment with a question or opinion.

Pro-tip: Reduce your chance of getting unmatched or ghosted by avoiding these Hinge Tinder bingo offenses.

Hinge Tips, Advice: Should You Use Hinge Invited You To Start The Chat?

If you are interested in someone, make the first move. Take control of your love life. If you are a passenger in your own life, things will not go the way you hoped for or planned. However, you shouldn’t be the one to continually message first – don’t text him. Make sure the other person matches your energy, interest and enthusiasm.

There is a fine line between taking the lead here and there and being too clingy, making excuses for others and trying to see if he or she is interested in you.

Some guys and girls try too hard to make something out of nothing on dating apps. One of the biggest reasons is lack of options. Rather than trying to convince someone you are not really interested in to go out with you, focus on yourself and what you can influence and control.

Work on your appearance, smiles, style, hobbies, interests and conversation skills. Improve yourself and make yourself more interesting and more attractive, so you can afford to be more picky.

How To Respond To A Like On Hinge? Do You Respond To Likes Without Comments? Hinge Etiquette

Likes alone are meaningless. If you like someone, add a note to the like. I generally advise people not to respond to a simple like alone. It can be viewed as lazy or can be viewed as something done by someone who is shy.

Focus on those that put forth a little more effort and creativity. If you do like someone, don’t just send a like, send a note as well. Reference their profile, photos or captions. Don’t use a boring intro like how are you or what are you doing.

How Do You Start A Conversation With A Guy On Hinge

Look at his profile, prompts and photos. Look at details like logos on shirts, items on his plate, background locations, facial expressions or random observations. Specific, pointed comments, opinions and even light jabs are a great way to show you reviewed his profile rather than starting things off with generic, lazy openings like hi, hey, how are you, how is your quarantine.

Hinge Date From Home – Ready For A Video Or Phone Call?

After matching, Hinge users will see a “Date from Home” menu pop-up appear at the bottom of each conversation with their matches. This prompt will ask if they’re ready for a video chat or phone call with their match. This prompt came from a survey of users suggesting they would be open to a digital date. You can select Ready or Not Yet. If both people select ‘Ready’ both users will be notified. Hinge will eventually ask you if you met up (private feedback).

Video chats are super popular during Covid-19 and a great way to reduce catfishing efforts.

If you are no longer interested in speaking with someone, you can unmatch or slide the conversation left and select hide to hide the conversation for a later time. Typically, the more you engage with someone, the more polite thing to do is to state that you are no longer interested in the person. Any match with no activity in 14 days is automatically hidden.

Hinge is a notoriously buggy app. Every so often on Reddit and public forums, you will see people mention their messages never were sent or they disappeared. While this is possible, it’s also possible users are being shown less to others and that too much swiping, messaging is hurting their chances whether it’s a bandwidth issue or if you believe the internet, shadow-banning on Hinge.

It doesn’t hurt to see if there is a bug on Hinge by emailing customer service with examples, account info, device type and screenshots.

For additional tips on all things Hinge related: https://eddie-hernandez.com/category/dating-apps/hinge/

Popular Read: What Do Your Dating Photos Signal?