There are plenty of solid to great apps on the market so this one will have its work cut out for it but it does have the greatest launching pad to make a splash in the crowded dating app market. Below is a overview of the app, what to expect, pros and cons, where to find it and who can and can’t access it.

After an initial launch in select, limited markets Facebook dating is now available in the United States.

The selling point of Facebook dating as noted by their PR firm is that it “is a separate experience within Facebook” and “takes the work out of creating a dating profile.” Let’s take a few seconds to digest that last quote from their press release.

Many users on dating apps are inherently lazy. Few people take the time to write meaningful bios and thoughtful answers.

If syncing data from LinkedIn, Facebook and Instagram is not lazy enough then I can only imagine what will be in when you are forced to do even less work. Among the countless red flags I advise client to look out for is incomplete profiles and few photos.

“With one tap, we’ll suggest photos and information from your Facebook profile”

Successful dating requires time, effort, energy and sincerity. You can blow through the process of selling yourself without carefully curating information, stories, anecdotes etc.

How To Enable Facebook Dating, Is There a Link? How To Get It?

Facebook Dating is a feature within the main Facebook app, there is no separate app for the dating function. Scroll down this post if having trouble accessing it as it is only available for specific countries currently.

I imagine the main focus for Facebook dating is to get users to fill in more information and to collect more info.

Users of dating apps already give up plenty of personal info but now that data can possibly be synced with profiles giving one the largest data collectors of private information more data about you, your taste in profiles, messaging style etc.

Aside from the privacy concerns, scammers use Facebook to collect publicly displayed information to target users whether it’s to obtain personal information to guess security questions, quickly bond with users over similar interests, or copy photos to create other profiles.

Essentially, Facebook dating reduces the number of steps a scammer needs to take to do this.

One feature from the press release that caught my eye is displaying public information about events.

“You can choose to see other people who are using Facebook Dating that fit your preferences within the groups you are part of and the events you have attended or will be attending. When you choose to see these people, you will also be visible to them.”

Sounds interesting but ask any woman on a dating site and you will hear countless stories of being stalked by past dates, unmatched matches or complete weirdos who saw their profile and tried to reach out through another platform.

Displaying event attendee information will alert creeps to your whereabouts and notify scammers when you won’t be home.

The one possible redeeming feature of this service is the Secret Crush feature. Discover which of your friends is your secret crush with the double-opt in feature. If you two mark each other as a secret crush, both of you will be notified. If it is not mutual, no one will know except for you.

Putting oneself out there is not a core personality trait among people on dating apps even among strangers, so I find this feature may lack any significant traction but it doesn’t need to – it just needs to sell hope.

Like many other dating apps, Facebook dating is not without incomplete profiles and bios of users. In fact, it appears that Facebook has fewer required fields than most others popular dating apps (Bumble, Facebook, Tinder etc.).

This can be frustrating but it can also be temporary as the main focus for Facebook these early days is on growth, so I expect it to gradually force users to update/add details over time.

The Preferred Dating App For Cheating

With that said, there is one feature of Facebook dating that can facilitate cheating more than any other app out there and that’s in the settings.

Facebook unintentionally created a setting that gives users the option to avoid awkward interactions among friends and friends of friends. By doing so it also made it easier for people to create a dating profile while minimizing coming across people they know. 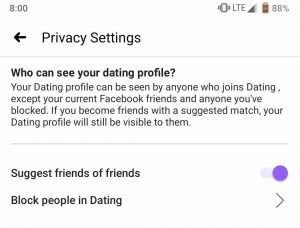 This coupled with the fact that you don’t need to download another (obvious) dating app makes it that much easier for people to cheat.

Full Circle, Return To Its Origins – Facebook Reverts To Poking

Facebook started off as ‘The Facebook’ which was more or less a curated set of Hot or Not profiles for Harvard. Its DNA is embedded in dating.

It’s only fitting they try to come full circle and not only embrace their origins but also use it as a last ditch effort to regain users and data lost from all the privacy scandals it has endured the past few years. The ambiguous Facebook poke is back with Facebook dating.

The One Advantage Facebook Dating Has Over Other Dating Apps

After a few weeks I have noticed a steady uptick in users who have tried Facebook dating that have not tried other dating apps (the number of users in the San Francisco Bay Area has tripled over the first week since launch). The most likely reason for this is simplicity.

Facebook dating not require a new app to download (if you already have the main Facebook app) and it does not out you with alerts and notifications that are common with Bumble, Hinge etc. Facebook dating is a bit more inconspicuous.

Some folks might be attracted to this approach (kind of like dipping your toe in the water) but at the same time, these folks may or may not be serious about meeting others.

After a few weeks of investigation and learning more about the profiles on the app, it appears that most people on the app are either brand new to online dating, dipping their toes in the dating water with limited/incomplete bios and profiles, Facebook employees (trying to boost numbers or doing user research), and those that do not wish to download another app and are curious to see what’s this all about or see who is on the platform.

I have a number of clients who worked/work at FB and none of them use the app (interpret that as you will).

As of late November, users now have the option of integrating stories to their dating profile which can be a good thing to give people an up to date and more 3-D look at you but relying on stories is unnecessary if you are honest from the start and don’t use bad photos.

Facebook Dating is also only available to those 18 and up. Occasionally the app will be buggy given how bloated it is. Here are a few things you can try:
– Log out of Facebook,
– Make sure you’re using the most updated version of the app;
– Restart your phone;
– Uninstall and reinstall the app;
– Log into Facebook and try again.

Facebook announced recently in April 2020 that it will launch video chats, dates via Messenger. More on that coming soon.

There is no such thing as Instagram dating despite what you find on the internet. There are some people who search for hashtags or will DM a person on IG to try to flirt with them and ask them out.

By this definition, anything can be a dating app including LinkedIn, Quora, Reddit or any other platform. Don’t be weird or creepy or pervy. Stick to explicit dating apps.

Same as you would on any other dating app.

For the time being, I highly recommend clients avoid using Facebook dating. There are plenty of other great dating apps that do a fine job depending on your demographics (age, location, gender, orientation and lifestyle). For what it is worth, even clients of mine who work at Facebook don’t even use the app.

If you need help to figure out which app(s) are best for you, contact me today. Currently, Facebook dating works with the mobile app and does not work yet on the desktop site or mobile site.

If you are trying to figure out which dating apps are right for you, check out these posts:

Is Online Dating Worth It? – Are Dating Apps Worth The Time, Effort

Bumble vs Tinder vs Hinge – Is Bumble Better Than Hinge?

Tawkify Reviews – Is Tawkify Worth It

How To Have Success With Dating Apps – Dating Site Tips For Hinge, Bumble