Is It Ok To Lie About Age On Dating Sites (Tinder, Bumble)? Why Do Guys, Girls Use Deceiving Profile Photos? How Old Should Your Online Dating Photos Be? Using Fake Names

There are many reasons why someone might be tempted to shave off a few years about their age but my hard line stance on this topic is a firm no. I’ve actually turned down working with folks on their dating profiles and photos over this seemingly small detail.

My goal, when it comes to online dating photos, is to present natural, candid honest representations of folks (which is why I don’t photoshop images or take weird angles) and to improve the dating pool and experience for all – I cannot do this if folks lie about their age despite it being one of the most common lies on dating profiles.

These small lies are often categorized under the umbrella of catfishing called kittenfishing in online dating terms.

For additional tips on online dating etiquette, read this post about messaging, first dates and more.

Is It Ok To Lie About Age On A Dating Profile? Is Lying About Age A Deal Breaker?

When it comes to dating, I am a firm believer in telling the truth.

I am aware many people lie or stretch the truth when it comes to their dating profiles – slimming photograph angles, favorable articles of clothing, outdated photos, filters, hatfishing etc. and while those hover on subjective lines of truth, those are all lies in my opinion and age is no different.

Lying about something as simple and seemingly innocent as one’s age is a sign of insecurity in my opinion – if you are lying about your age right off the bat, what else are you lying about in your profile? More dealbreakers here.

What other lies can I expect in the conversations, our first date? Read more about online dating red flags here. Some people think lying about age is harmless, there is even a term for this called ‘kittenfishing’. Not quite as egregious as ‘catfishing’ but something more subtle.

Reasons For Lying About Age On A Dating Apps Like Hinge, Bumble & Tinder

The most common reasons I get from men when it comes to lying about their age is that they look or feel young (aka I want to date or I think I can date younger women or don’t want to date men their age). While it is true some men might be more vigorous, youthful, athletic than men their age, lying about one’s age is not only misleading but deceptive.

Age can come into play when it comes to family planning, generational common interests etc. This perception is perpetuated in movies and society – visit a popular matchmaker’s website and you will see wealthy men in their 60s seek out women in their 40s and even 30s.

There is nothing wrong with targeting people of a certain age but lying about is wrong and can even get you kicked off dating sites and apps (if you see someone lying about their age you should flag their profile).

As for women, the main reasons for lying about one’s age is that they look and feel young and would like to date men closer to their age or slightly below their age. It’s common for women to get propositioned by men 10, 20, 30 years older than then on dating sites despite making it clear on their profiles they are seeking men of a certain age or looking to start a family.

Often times I hear that women do not want to get overlooked through search filters, so they will subtract 2-7 years from their age to make a cutoff on age filters and preferences. I do sympathize with women in that men routinely target women much younger than themselves leaving older men to hit on them, but I am a strong believer in being as honest in a profile as possible to establish confidence.

Addressing the lie on your profile doesn’t help out much either. It will appear like a bait and switch at best or insecurity or lying on your Facebook and/or dating profile or all of the above.

Similarly, there are girls on the apps that lie about their age saying they are over 18. This is not a valid excuse to play dumb or act innocent as a guy. One cannot blame the app or the minor if you start to engage in contact or send graphic photos.

It may not only be illegal, but you can go to jail even if you never meet in person depending on what kind of messages are sent and what arrangements you make to meet up.

This is all the more reason people should not use dating apps until after college or early 20s. This is also why you shouldn’t sext with a stranger or someone you don’t know on a dating app. Stick to meeting people your own age otherwise you can get into serious legal trouble and ruin your life, be label as a sex offender or worst. 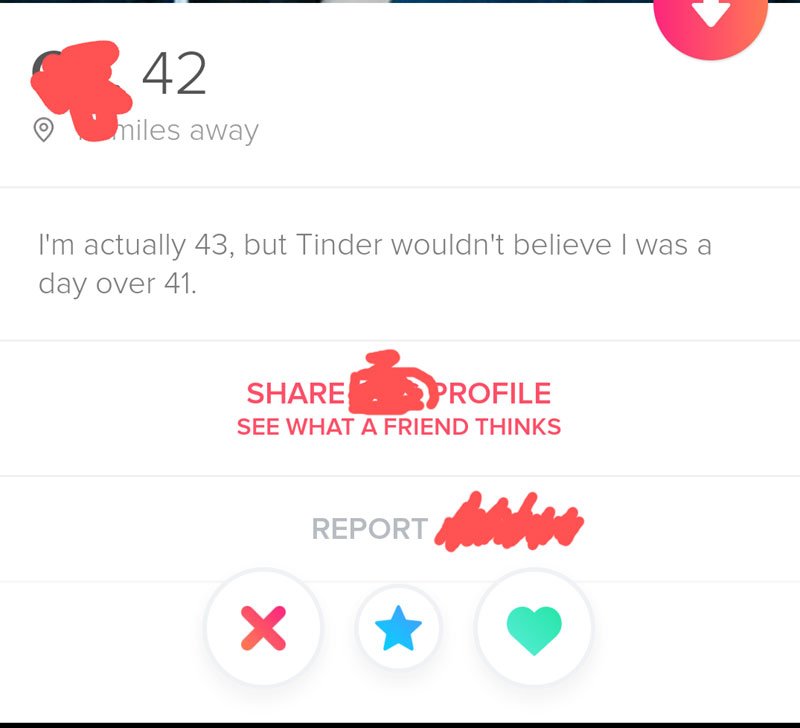 Some men learn this bad behavior at an early age – they seem to get away with it or are enjoying the chase so to speak. Women typically seek men their age or older early on in their dating lives. These two behaviors grow and spiral out of control decades later.

If men could learn to be more mature (and refrain from dating younger women who are more likely to put up with their behavior) and date women closer to their age AND if women would date more men their age or even few years younger earlier on in their lives I think we could start to chip away at this age gap and see some changes in behavior early on.

While that pipe dream hangs out in the clouds for the time being, you should learn to analyze profiles and photos to see if people are telling the truth when it comes to age, ask questions on your first date, and cross-reference public sites and profiles.

Shaving off a few years is typically seen more so on dating apps that veer toward more casual and hookup culture but that doesn’t mean sites like Hinge, Coffee Meets Bagel or Bumble are free of people with inaccurate ages. Lying about one’s age is a red flag and a possible sign for things to come.

Having too many varying photos (age, hairstyle, hair color, facial hair etc.) can raise some doubts or concerns and increase left swipes on your profiles. For more online dating FAQ’s, read this handy intro guide.

The other set of deceiving, misleading photos on dating apps are those taken from high angles aimed to make one’s appearance slimmer. If you do this, don’t be surprised if you get ghosted after first dates often. One of the biggest reasons for not being able to get second dates is lying about yourself and your appearance.

How To Tell How Old A Photo Is On A Dating App?

If you have questions about how recent a photo is on a dating app or curious to confirm someone’s age, there are various methods to do so. I don’t want to alert folks to the methods used and have them cover their tracks so instead I offer clients this service to do this for them and also find subtle ways to inquire about photos in a profile.

How To Tell If Someone Is Lying About Their Age Online? On Hinge, On Tinder, On Dating Sites?

Some simple background checks can provide clues but there are other online services and custom providers who specialize in this.

Why Do Men Lie About Their Height on Dating Apps Like Tinder, Bumble and Hinge?

Like age, men feel attacked whenever they are told no or told they can’t have something. Many successful men or men who have A-type personalities think money, status, confidence etc. can make up for height deficiencies and so it is not uncommon for a guy to add 1-2 inches to his height. Call it the Napoleon syndrome.

You can see all the outrage by men online once Tinder announced the height verification feature on April Fool’s Day last year.

I still consider these things lies (some more than others) but you should expect people are kittenfishing on dating apps here and there. Catfishing is when you take on someone’s identity, lie about yourself or misrepresent yourself i.e. use photos that are 5-10 years old or 20 pounds lighter.

Contact Bumble directly at feedback@team.bumble.com for other customer support services, check out the help desk for all dating apps here: https://eddie-hernandez.com/dating-app-contact-support-pages/

Some apps allow it, others may ban you if reported. Apps like The League sync data from your Linkedin profile.

Should You Use Your Real Name On Dating Sites Like Hinge, Bumble?

One should use their real name on dating apps otherwise, what else are you hiding or lying about? Might suggest you have stalkers or lingering exes, drama. If you are concerned about privacy, remove your information from the internet or get off dating apps.

Should I Use My Real Name On Bumble, Match? Fake Names On Hinge Tinder

Proper etiquette on dating apps suggest one should use their real name on dating sites. I understand there are privacy concerns and stalker concerns but that is all the more reason not to use your dating photos on other social media platforms, to not list your title nor company on your profile (industry and function is fine) and use Incognito modes to hide your profile from others unless you send the person a like first.

If you lie about your name, what else are you lying about? People might assume you are insecure or have a lot of stalkers in your life. Avoid sketchy apps and knowing how to ID red flags and use good judgment helps too.

It’s easier for people to lie online in their profile or messages than it is in person. Sometimes you have to catch someone off guard and gauge their reactions to questions.

What If A Minor Lies About Their Age Online?

Don’t talk to minors or anyone that looks like a minor. Similarly, don’t get physical with anyone you don’t know. Not knowing or being unaware is not an excuse for many jurisdictions, law enforcement agencies.

Nothing at first but if people report you enough, your account can be suspended or even banned.

-As seen in the NYTimes, Wall Street Journal & More

The Most Common Lies Told On Dating Apps

How To Write A Good Dating Profile

How To Spot Fake Profiles On Dating Apps

Signs Of Manipulation While Dating And In Relationships

How To Be More Successful With Dating Sites