Match.com is one of the early pioneers of the online dating industry. With a straightforward approach to creating detailed profile, browsing matches and messaging individuals directly it quickly became a popular destination for singles looking for love online.

Over the years, other entrants like Bumble and Hinge came on the scene changing the way singles approached dating apps. Syncing data from Facebook, uploading photos directly from your phone and quickly swiping on profiles made it popular among folks looking for something different.

As such the demographics of Match.com started to change to reflect a migration of users to other apps as well as attracting those looking to elaborate more about their personality, those looking for something more serious than the implied hook-up and casual fling of Tinder as well as those not eager to go all in on mobile only dating sites.

Back in October 2018 I took a look at the profiles listed on the site across some of the largest Northeastern cities in the United States to see what the demographics looked like for those new to the platform or curious to understand their competition or lack thereof.

Below is a graphical representation of genders and ages.

(For advice on improving your Match.com profile, check out this previous post). 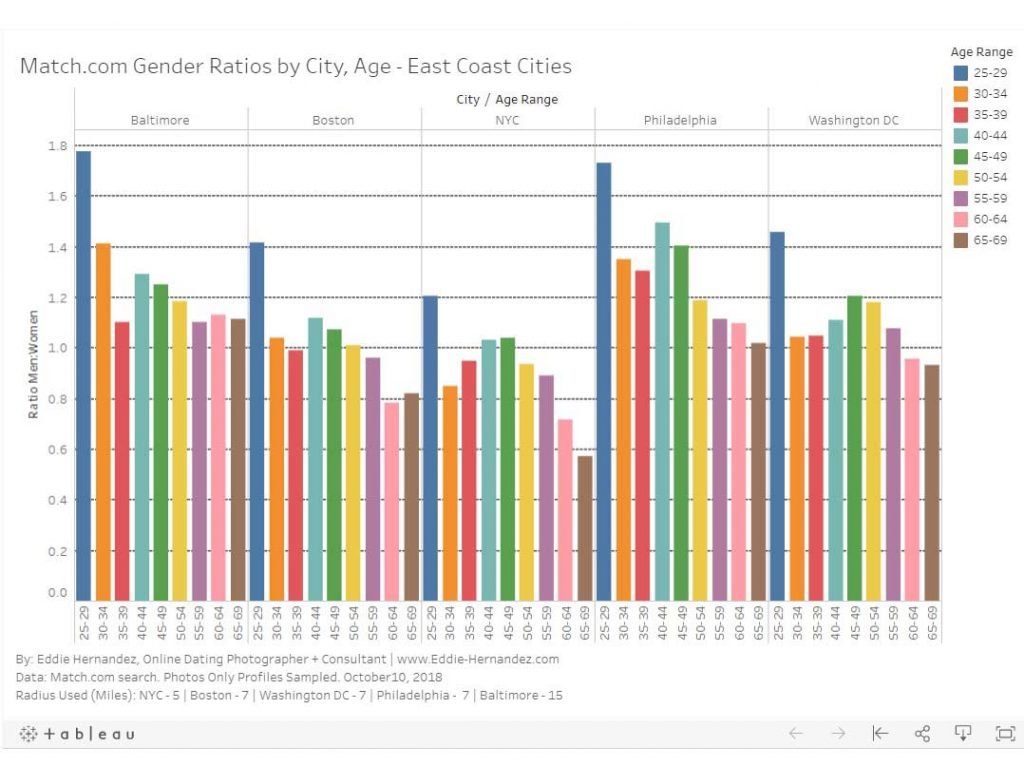 Looking at the demographics of the Northeastern cities of the United States on Match.com, it’s easy to see that many young guys gravitate to dating apps earlier than their female counterparts.

Men are competing for a smaller pool of women in these markets and a lack of matches, replies or even profile views can lead to frustration, depression, or drastic efforts to get the attention from women.

Layer on top of this the fact that Match.com is one of the few dating sites that requires people to pay for subscriptions to message others, frustration can kick in leaving many to wonder if their advances were rejected or if they were ever read at all.

Given that the Tinder’s of the world are viewed as more superficial and photo visual, Match offers a more holistic approach to marketing oneself. This is a big selling point for a number of introverted men who are a bit shy, a bit quirky and lack captivating photos.

However, as you browse older groups of folks, the gender ratios across many areas begins to level out closer to a 1:1 ratio of men to women. There are several possible explanations here but I have a few guesses as to why:

-Men are more likely to start using dating sites at an early age than women.

-Women are more likely to start using dating sites later on in life after a life event, desire to start a family or disinterest in using hookup sites like Tinder.

-Men after years of frustration of and rejection from using Match.com abandon it in favor of free apps like Tinder that cater to more casual encounters and don’t reveal preferences like age like Tinder .

-The number of technology and startup jobs that attract more men than women right out of college (selection bias).

-App culture of where people are exposed to making every aspect of their lives (ordering clothes, cabs, food etc.) easier through their phone.

Dating In New York City, Boston, Washington DC: Why Is Dating So Hard

Sure the odds are slightly better here than in Seattle and San Francisco but East Coast cities are large and many options to choose from here.

It’s important to differentiate yourself from the competition by dressing up, working on your smile, selecting the right app in your area, working on your posture and communication skills as well as having diverse interests and hobbies that make you more interesting and help you get more likes and dates.

Dating apps (in my opinion) are meant to serve as a supplemental way to meet people outside your normal day-to-day routine – it is not meant to be a crutch nor the only way for you to meet others.

They are also meant to introduce you to others, you should not expect that profiles are verified, people are telling the truth nor are single and physically and mentally available.

Unfortunately, the demographics of Match.com has led to scammers to prey on lonely folks searching for love on the site. Use precaution when chatting with or meeting people from online dating – read this safety guide for help.

—If you are new to online dating, check out this FAQ guide before you start swiping away.—

Contact me today to find out when I will be in your area next!

It can depend on your age, location, gender, orientation, lifestyle, height but generally the top ones are Hinge, Bumble, The League, OkCupid, Coffee Meets Bagel, Match.com. Read this breakdown to see which apps are best for your needs.

Dating In San Francisco: What It’s Like Dating In The Bay Area