Dating As A Short Guy: Dating A Taller Woman

Height is a rather delicate issue for many on dating apps. Lying about height is one of the most common lies told on dating apps by men (next to age, marital status, employment and age of dating profile photo). Most think there is nothing wrong with adding 1-2 inches while others view kittenfishing as another form of lying.

I typically take the view that lying is lying whether one adds a few inches to their height, uses photos on their dating profile that doesn’t look like them now, fails to disclose they are married or states they are looking for a relationship but really have no interest now or with said person. If you lie about height, what else are you lying about?

Why Do Men Lie About Their Height on Dating Apps Like Tinder, Bumble and Hinge?

Like age, men feel attacked whenever they are told no or told they can’t have something especially if it’s out of their control. Many successful men or men who have A-type personalities think money, status, confidence etc. can make up for height deficiencies and so it is not uncommon for a guy to add 1-2 inches to his height. Unfortunately, some dating profile ghostwriters also think this is a good idea for their clients which makes the situation even worst.

Call it the Napolean Complex aka short man complex. You can see all the outrage by men online once Tinder announced the height verification feature on April Fool’s Day last year on Twitter. Many guys on Reddit complain about dating apps and place all their misfortunes on when that will not acknowledge them unless they are 6 feet tall or look like a model. This jadedness permeates on all dating apps but especially Tinder. 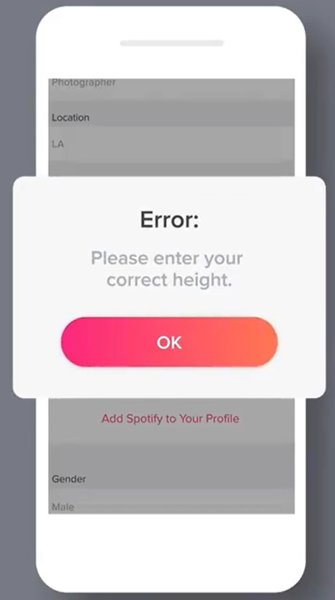 Most men feel that if they add 1-2 inches to bypass the height filters on dating apps that women won’t know or won’t care once they meet. Some women prefer to date men at least 3-4 inches so they can wear heels with confidence where some shorter women (i.e. 5’0″ to 5’4″) still prefer guys 8-9 inches taller than them. It’s not uncommon for short men to lash out at these women for having “unrealistic expectations”.

This back and forth unfortunately leads to a loop where women then increase their height preferences to reduce the chance that they meet guys their height or shorter. The guys that lie about their height ruin it for all guys. Sure, men are more likely to meet and date taller women if they met offline, in person because they have appearance, looks, body language, vocal tone, timing and a woman’s attention to make a move.

If dating apps odds are stacked against them, why are guys on dating apps then? Well, these days, men are blaming covid for not having options.  Regardless of the reason, men are more likely to blame women, apps or societal norms rather than look at their own shortcomings (no pun intended). Most men (and women too) have no idea the ways they are self-sabotaging their profiles with bad photos, profiles, captions, facial expression and lazy prompts.

Why Women Like To Date Tall Men, Does Height Affect Dating

Even if a short guy is confident around women, they may not be as confident in other aspects of his life (friends, work etc.). Dating apps are all about first impressions, approachability, timing and luck. Yes, filters make it tough to get past those initial filters, so it’s best to focus on what you can control, influence (smiles, wardrobe, approachability, financial stability, confidence / comfort in own skin, interests, passions and lifestyles). These are the attributes that all women seek in a male partner however taller men tend to exude more confidence, attractiveness than shorter men.

It’s no secret that one of the biggest reasons why women struggle with dating apps is that they focus too much on the superficial aspects of a profile (height, career and looks) early in the process and tend to ignore the other attributes. Many women lack the ability to analyze profiles, read people, avoid red flags and call it quits in a relationship. Guys are much better at doing background checks, screening for catfishers, fake profiles etc. – they are less trusting early on.

Women tend to believe guys too quickly when dating; they tend to be more accepting everything he says is true rather than analyze his behavior, responsiveness, etiquette, manners and other underlying tones and signals.

The other reason why women like tall men is that tall men typically are more comfortable in their own skin and come off as such in their messaging and conversation skills. Even in 2021, many women still like to adhere to gender stereotypes i.e. let the guy make the first move, let the guy ask the girl out. Most guys with limited dating experience lack this confidence that is sorely needed to stand out from the crowds.

I attended a speaking engagement about dating years ago in San Francisco and a guy in the stands made a comment about why it’s so tough for men to date these days. He said if a guy doesn’t have the 6-6-6 measurements, he has no chance (6 feet tall, 6 pack abs, 6 figure salary). I could tell just by looking at his appearance (name the way he dressed and the way he groomed himself in addition to his tone, jadedness) he was not going to meet anyone soon. It wasn’t his height, weight nor career that was holding him back (sure those things help), it was his miserable attitude and lack of confidence.

Height-fishing: What Else Are You Lying About

I advocate for being honest on dating apps. If you are lying about height on dating site right off the bat, what else are you lying about on your profile, in your life? Just because you can meet someone in person more easily doesn’t mean you should lie on dating apps to make up for lack of success.

For my women clientele, I recommend reporting guys who lie about their age, height or recent of photos on dating apps to reduce this behavior. It’s never good to start off a relationship on a lie. Men: do you want to be with someone who is that superficial if they wouldn’t date you otherwise?

Lying about height can signal other things in one’s life, namely insecurity. If you have to revert to lies, it shows you are not confident in yourself nor your appearance. I would argue insecurity is a bigger turn off than physical looks and height. Lying about height also shows that you don’t care about a woman’s preferences or think she knows what’s best for her. It’s this male attitude that drives women away in droves.

It’s no secret most women want to exclusively date men of their height or taller so how do you go about attracting women then? First off, work on yourself. This includes: smiles, wardrobe, financial stability, style, charisma, hobbies, interests, manners, lifestyle and banter. This takes time and most men are impatient. Many guys try to hack their way through dating apps and are unwilling to put in the time and effort to work on themselves offline and online.

The ones that do get awful, bias advice from friends most of the time (either they have no luck with apps, are more attractive and don’t have the same hurdles you do, or they are unwilling to be brutally honest with you). You need unbiased, trusted help when it comes to dating. Most guys are uncomfortable with getting honest, direct feedback especially if they have success in other aspects of their life. They view it as an attack on their self-worth.

The ability to be comfortable in your own skin is invaluable. If you can’t get pass the filters on dating apps, get off of them or just use the dating apps that I recommend for shorter male clients. Too many men default to dating apps out of laziness or fear of being rejected in person. Guys tend to focus too much on the negatives and what if’s. Reduce the odds and go offline where you have a woman’s attention rather than compete on dating apps that have a gender imbalance.

Avoid being ambivalent. Be direct, be candid, be self-deprecating and be chivalrous. Look her in the eye when you speak. If that doesn’t work, play the odds and focus your attention on shorter women closer to your height or shorter. I am all occasionally aiming outside one’s league but if you exclusively do that, it will be brutal. Focus on being a versatile individual. There are too many dorky, tall guys that rely on their height and have no substance. Don’t focus on what you lack, focus on what you can improve upon and have advantages in.

Do Guys Care If A Girl Is Taller, Do Men Like Tall Girls, Would A Tall Girl Date A Shorter Guy

Some guys are insecure about dating taller women and purposefully date short women. In extreme cases, they only date shorter women as part of manipulation tactic or because they can’t date women their own height. Most men wouldn’t mind dating a taller woman.

Similarly, tall women sometimes are a bit insecure about their tall height, are a bit clumsy or wish they were shorter. The benefits of dating a tall woman are limitless, but you will be taken more seriously as a man for having the confidence to do so and being seen in public. Being a confident guy goes a long way. As long as you are comfortable in your own skin, that’s all a woman cares about as all women want confident men.

Guys like submissive women they can control. There are also some other, size, preferences involved, but I won’t get into that. Some guys just don’t want to deal with a woman they think is too controlling, difficult or intense. They want someone who is easy, a pushover and won’t challenge them. Obviously this is not all men, but many tall guys have their pick of the bunch when it comes to women, so they choose the path of lease resistance.

Just like with dating apps in general, it’s not uncommon for guys to swipe on everyone to only focus on those that they are most interested in and won’t challenge them.

When it comes to online dating, preferences and deal-breakers will vary but assume women want to date guys 2″-4″ taller than them. There are some women who will demand great height differences but that’s a whole other issue and I have my thoughts and theories on that for another discussion. Some women who don’t wear heals often might be more open to a shorter guy whereas women 5’2″ only want guys 6′ tall. The point is, you should be aware of the statistics but always aim high.

Similarly women should date guys shorter than them since guys don’t have that hang up. The more restrictions you have the more likely you will be single a greater portion of your life. There is a fine line between preferences and deal-breakers. Guys don’t care about height, age and education as much as women so unless women start to open the playing field more and at an earlier age, they will have fewer options over time.

The Most Common Lies Told On Dating Apps

How To Spot Fake Profiles On Dating Apps

Signs Of Manipulation While Dating And In Relationships

How To Look More Attractive In Dating Photos

How To Be More Photogenic In Photos