Login Errors, Like + Messages Not Sent, Banned From Hinge, Tinder

Unable To Log In to Hinge, Tinder, Bumble. Phone Number vs. Facebook Registrations, Likes & Messages Not Sent. Shadowbans. Solutions On How To Appeal, Get Unbanned. 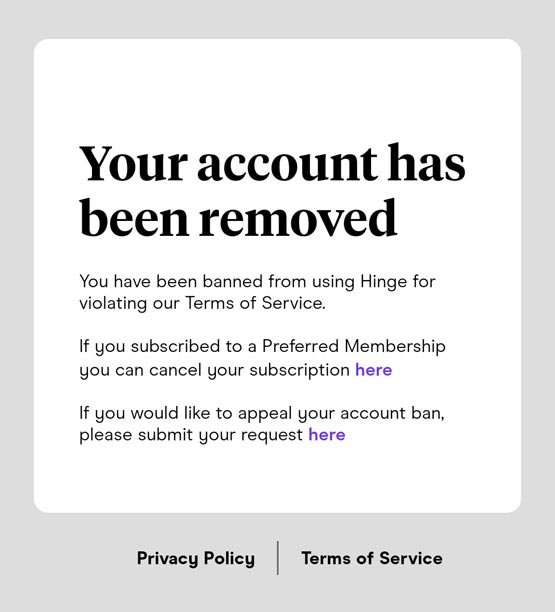 (Before I dive into the aspects of alleged shadow bans, getting banned from Hinge and Tinder it helps to understand where each app comes from. Even though they are both owned by the Match Group, they operate in completely different ways and have different terms of services and expectations. As an online dating photographer and profile consultant (based in San Francisco w/ clients in Los Angeles, NYC and beyond), I have seen it all when it comes to login issues, bans, shadow bans and more.

Tinder is traditionally viewed as a hookup app or for younger crowds but depending on where you live and what your options are, it can be used as a legitimate dating app with those seeking relationships.

For additional posts on all things Hinge related including prompts to use, photos, liking v. messaging check out my other Hinge blog posts.

What is Hinge? Overview: “Designed To Be Deleted”

Hinge is one of the most popular dating apps among folks 25-45. Ithas been around since 2012 and in June 2018 Match Group acquired 51% stake in the company with a 12-month window to acquire remaining shares. In February 2019 it did just that. It’s an unfortunate exit from a customer perspective (since Match is where all dating apps go to die) but I am hopeful the some bugs will at least worked out now that it has more resources from a technical perspective.

With that said, there are a number of complaints that have surfaced around using the app and I will go into detail around those frustrating customer service inquiries.

What is Tinder? Who Uses Tinder?

Tinder is often viewed as a dating app but I would argue it’s merely an introduction app more than anything else. Introduction to pen pals, friends, Instagram followers, travel guides, Venmo payments, hookups or something more.

On the app page, Tinder is described as: “the world’s most popular app for meeting new people.  If you’re here to meet new people, expand your social network, meet locals when you’re traveling, or just live in the now, you’ve come to the right place.”

Keeping that in mind, meeting is a rather vague term. It can be virtual or physical. As such there is more ambiguity around what is for and what kind of people use the app. Using Tinder in a large city like New York can have different intentions than those in rural towns of Central California. Apps like Hinge are popular in larger cities across the United States but for more remote areas, Tinder is still a popular app for relationship focused adults.

Tinder Keeps Logging Me Out Of The App

One of the most common issues Hinge users face is an inability to login to accounts. What’s worse is that Hinge rarely give the reason behind the errors and when it does, it is often vague in details.

Some people cite reasons like they don’t want to be tracked or don’t want to create a Facebook account. Those are perfectly fine reasons but often times people lose login information for Facebook or use a burner phone to create an account on Hinge.

If you lose this information, this can be problematic as you need this info to retrieve passwords and log back in. If you are unable to do this, the logical step is to create a new account but this is not always a great idea. Creating multiple accounts can get you banned.

Creating multiple accounts on Hinge falls underneath the trying to game the system. When you create a new account on Hinge, users experience a significant increase in likes, comments and matches on the platform.

Hinge does a great job trying to give new users the best experiences, so they get hooked early on and eventually slows down showing profiles and showing your profile to others so that they can focus on monetization efforts.

Many users know this and will create another account to improve their matches but do this enough and Hinge will find you and possibly ban you. There are a number of ways Hinge can detect multiple accounts but I will not list them here.

Rather than deleting and creating a new profile, some users of Hinge are convinced that deleting and restarting your profile will give you a slight bump in matches. That might be true as Hinge might want to retain users if they decide to take a break or want to see where things go with a current match.

Reporting Users and Profiles on Hinge

With such a low bar for registration on dating apps, one can expect a few bad apples to enter the platform. Aside from the internal measures Hinge has in place to detect users with multiple accounts and those that try to restart their accounts often, Hinge relies on user feedback to help identify users who harass folks in the app or offline. Unfortunately this is not a perfect system. Some people may not feel comfortable reporting users for small infractions or larger, serious ones.

If a date lies about their age, appearance, height or weight than it is perfectly acceptable to report the user to the app. If someone harasses you in the app or offline, make sure you are able to keep notes, screenshots, evidence in case you need to report them to the app or to authorities. Unfortunately some harassers may try to elude being reported and report you (the victim) instead.

Even if you are not abusive nor threatening, you can get banned on Hinge if your profile and communications suggest you are not seeking a relationship but rather something casual or a hookup.

Online dating is tough and when people start to drop off on matches, people naturally assume they are what’s called shadow-banned. It’s a term that suggests a profile is not being shown as often or at all or communication is not being sent to others on the platform. The thought around this is that they were reported and although not banned from the site, can still use it but not like before. Some people believe this is a thing because they get no likes on Hinge (a topic discussed daily on Reddit).

I personally don’t believe users are shadow-banned but I do know Hinge is super buggy. Likes and messages not sent, seeing a profile again that you previously communicated with.

Whether its a bug or intentional approach by Hinge to be ambiguous and frustrate users to the point that they look to upgrade memberships, people tend to blame the app rather than see if there is a solution with customer service or the more obvious reason – work on their own profiles, photos, bios and communication skills.

Every so often, bans are executed erroneously. There are a few cases like this that can occur when using burner phones and Facebook logins. Burner phone numbers are recycled and are used by people who get banned so if you use a burner phone, your chances for getting banned increase.

Similarly, if you create a dummy Facebook account, you can get banned for seemingly doing something deceptive. Don’t create a 2nd Facebook account – not needed. Most apps allow you to register with a phone number.

If you are not comfortable with data privacy from apps and phones perhaps dating apps are not for you.

Creating fake profiles, misrepresenting yourself or lying about yourself will get you banned. There are times when apps make mistakes so it is important to take screenshots, create timelines and keep communication on the app to make it easier to review cases in which a ban was erroneously activated. I would say less than 10% of bans are overturned.

Go onto Reddit or any other forum and the common complaint is that users were banned for nothing – it’s always something. Rarely is it a bug or accidental report. “Tinder banned me for no reason” is repeated often on Tinder Reddit. There is always a reason for the ban – you may not like it nor agree with it but there is always a reason.

Tinder has less stringent rules around terms of service and as such it is harder to get banned from Tinder than Hinge for things around being relationship focused.

Creating a new profile is not always the best approach. Using a new email, burner phone is not enough as Hinge has very sophisticated ways to detect new profiles created by users previously banned. I will not get into the details here as to encourage bad behavior. 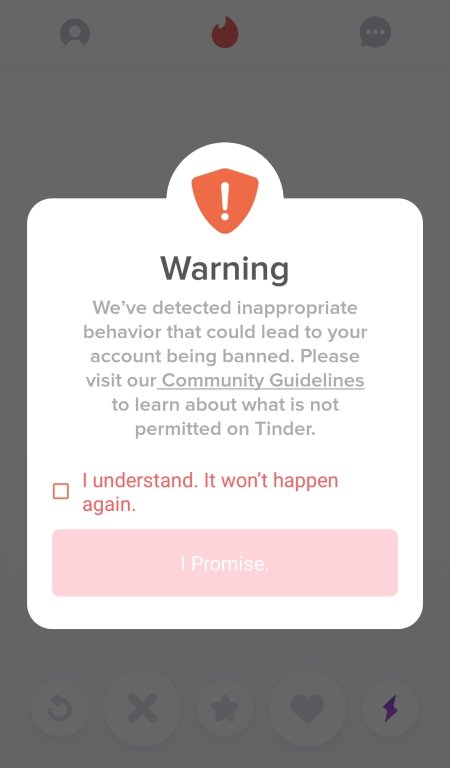 Bumble states there is no thing as a shadow ban but does doesn’t rule ou that swiping too much and getting in front of users repeatedly can cause more people to swipe left on your more often resulting in a lower perceived attractiveness on your profile. Read more here: https://bumble.com/en/help/am-i-penalized-for-deleting-profile

If you do anything illegal on the app including trying to sell services, you will get banned. https://bumble.com/en-us/guidelines

Trying to create a new profile once banned is challenging and even if sucessful, it might be temporary and/or your visibility might be limited. There are a number of ways dating apps can detect duplicate profiles. Your best bet is to contact the app directly and see if there was a mix-up.

It’s guys like Alex Hammerli that is forcing Tinder to clamp down on Tinder account-reset hacks.

Getting Banned From Bumble

Bumble is unique because it offers specific examples of inappropriate behavior and etiquette including copying and pasting introductory lines. “We strongly advise against copying and pasting the same message to every connection.” Spamming users with lazy lines or offers for inappropriate services will get you banned. Be original, thoughtful and creative. Similarly sexting can get you banned even if you think your match is attracted to you. Continuous uploading of moderated photos on Bumble can also get you banned.

Too Many Login Attemps With This Given Phone Number

If you get this notification, it could be you are using the wrong verification code on Hinge. It could alos be because of a Hinge error. Hinge has been down a few times (August 20, 2020 and August 25, 2020) and subsequently locked out all users with the above message, warning for a period of time – you are not alone. You might also get this message after inputting the verification code:

“Oof! We’re having issues on our end! Try back soon!”

“We ran into a problem loading new people, sorry about that!”

Hinge makes it incredibly annoying to contact them directly. They have no phone number nor email address (for good reason) but their customer support page is filled with pre-loaded questions and answers.

Check your Apple ID or mobile payment to see if it’s connected to another account.

Check your card to see if the expiration date changed or was updated.

To contact Hinge, Bumble, Match or Bumble directly, check out my customer support page with step by step ways to get to their submit a ticket page.

Next Read: How To Reset Your Dating Profile

Popular Read: What Do Your Dating Photos Signal?